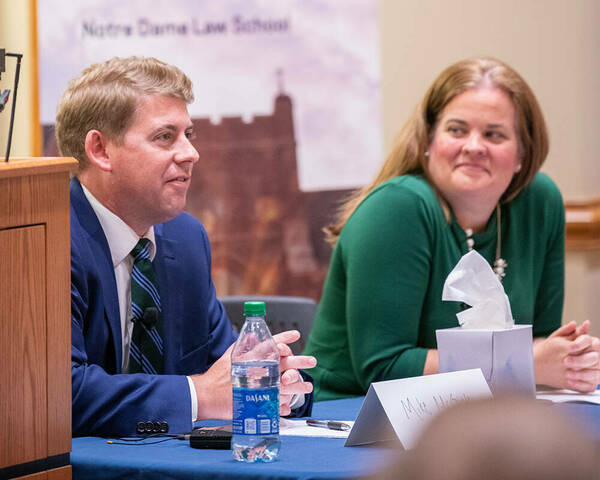 On September 26, Notre Dame Law School’s Religious Liberty Initiative hosted a “Careers in Religious Liberty” discussion with a panel of accomplished attorneys who have addressed religious liberty questions in a variety of settings, including nonprofit organizations, universities, the federal government, and private law firms. The event offered students a deep understanding of different career pathways that tightly interweave law and faith, as well as the motivations behind the panelists’ pursuit of their respective careers.

Lichter kicked off the panel discussion by reflecting on the training and skills necessary to be a successful in-house lawyer in a religious nonprofit setting. She advised that working in-house requires an attorney to get comfortable giving concrete legal advice in a way that is easy for non-lawyers to understand and act upon, and to develop the ability to discern quickly which issues to linger over. “Communication skills, analytical skills, [and] being able to write clearly — even or especially in your emails giving counsel to colleagues — are all important,” she shared. Lichter also advised that many subject-area expertises can lead smoothly to in-house work for religious institutions, including employment law, contracts, tax, property law, and regulatory compliance.

Having obtained her bachelor’s degree in theology and philosophy from Notre Dame, Lichter shared that her Notre Dame undergraduate education influenced her discernment of her vocation to serve the cause of religious freedom and that the Notre Dame network led to some of her early opportunities to do religious liberty legal work. She expressed, “As lawyers, there is a lot we can do to serve the Church.” Prior to taking her role as deputy general counsel at The Catholic University of America, Lichter led religious liberty efforts across the federal government in a previous role in the White House and led the launch of a religious liberty task force when she worked in the U.S. Department of Justice. “View your professional life as seasons that ebb and flow,” she advised students, as opportunities arise and as family or personal circumstances change. She closed her remarks by reflecting that “the backdrop of all that we are talking about [on this panel] is our families. All of us have made career decisions informed by our families. I try to stay in a constant state of discernment about when and whether my family’s needs might require me to make a change in my professional life,” she said.

Kelly emphasized the importance of soft skills, as well, particularly empathy and understanding multiple diverse perspectives. “There is a need in the legal field for people who understand the vantage points and perspectives of different people. Sometimes, different groups speak in a totally different language,” Kelly said. She advised students to surround themselves with people who think differently, as it would provide them with a much better and stronger understanding of the issues at hand. “Take the concerns of all the parties involved seriously and listen to them…One of the most valuable qualities of a litigator, of a lawyer, is empathy,” she said.

In a separate conversation that took place with the Religious Liberty Initiative that morning, Kelly stated that the biggest challenge to non-discrimination is that individuals do not prioritize understanding others and arriving at thoughtful, nuanced conclusions. Kelly has supported and advocated for individuals of all faiths through her work at the U.S. Department of Health and Human Services. Reflecting upon what has been particularly meaningful in her career, Kelly shared, “There’s an opportunity to help people who wouldn’t have the opportunity to hire an advocate and people who experience religious discrimination who aren’t really empowered to fix the problem on their own.”

McGinley reiterated Kelly’s point, stating, “One of the blessings of being a lawyer is that you’re trusted with other people’s problems…You’re often representing entities that are vulnerable. It’s a special opportunity.” He finds his work “spiritually enriching” in that his vocation is an act of service to others. As a Notre Dame alumnus, McGinley appreciates the way that faith is infused at the university. “The notion that everything you do is informed by and guided by your formation — that happened for me at Notre Dame,” he shared. “My religious beliefs inform how I practice as a lawyer, even in non-religious settings. Honesty, integrity, kindness, and empathy are all things that go into everyday life.” Like Lichter, who happened to be his classmate at Harvard Law School, McGinley spoke of the importance of mentorship and building a network of “people who you can confide in, will have your best interests at heart, and will look out for you.” He highlighted the importance of being mindful and intentional about seeking out opportunities, especially at a law firm. “Being intentional and knowing what you want out of your career [are] very important…You don’t always know if something will come your way. Put yourself in a position to say yes,” McGinley said.

Wilson wrapped up the panel discussion and focused on the importance of formation. “Your human formation is just as important as your legal formation. I hope you’ll devote as much time to that,” Wilson advised. As a graduate of NDLS, Wilson believes that Notre Dame is an excellent place for students to reflect on both their human formation and legal formation. Delving deeper into the meaning of human formation, Wilson stated that it pertains to “being able to say no” and “not just giving legal advice, but also giving a moral perspective and knowing your limitations.”

Like the other panelists, Wilson expressed that doing work in religious liberty requires strong mentorship. “Find somebody that you can trust and that will say, ‘you’re right to push back here,’” he recommended. Wilson currently serves as an adjunct professor at NDLS and is responsible for the transactional component of the Religious Liberty Clinic. Outside of the law school, he counsels churches, charities, private foundations, and associations on tax and corporate law matters.

Following the panel discussion, Seth J. Atisha — a 1L student at NDLS — reflected upon the importance of religious liberty and the dynamic relationship between religion and justice: “Religion offers hope in a world where fear and despair are readily available, especially in view of the great suffering and injustice endured by countless people throughout the world…Ultimately, the moral principles and hope that spring from religion, I think, grants individuals a deep purpose and motivation to seek justice and peace that few other motivators offer.”

Originally published by Arienne Calingo at law.nd.edu on October 05, 2022.