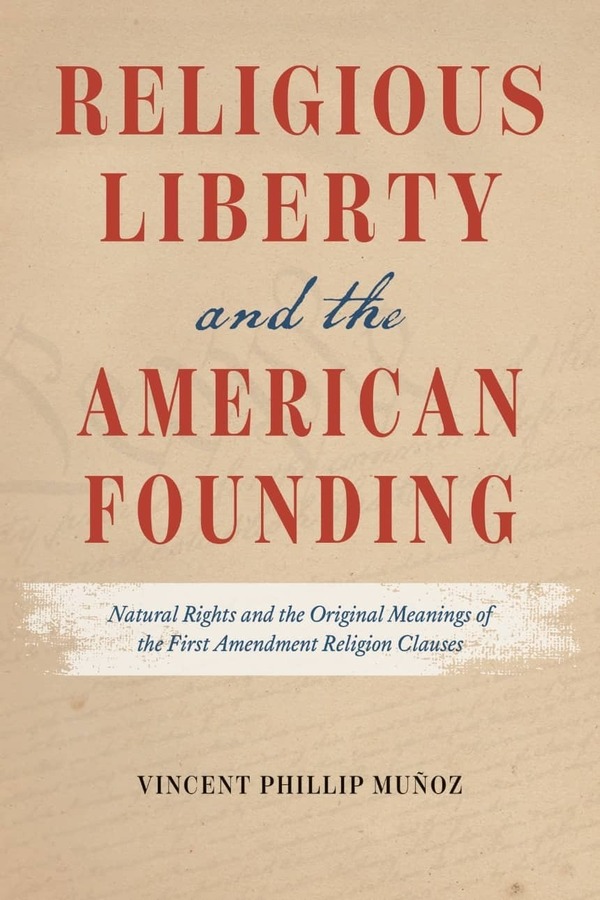 CCCG Director Vincent Phillip Muñoz has published Religious Liberty and the American Founding: Natural Rights and the Original Meanings of the First Amendment Religion Clauses with University of Chicago Press.

Religious Liberty and the American Founding explores the Founders’ understanding of religious liberty as a natural right. Muñoz explains the original meanings of the Establishment and Free Exercise Clauses of the First Amendment, and concludes the book with a focus on the impact of natural rights constructions of those clauses. He demonstrates that a hermeneutic adherence to the Founders’ political philosophy would yield neither consistently conservative nor consistently liberal results. Rather, adopting the Founders’ understanding would lead to a minimalist church-state jurisprudence that would frequently return authority from the judiciary to the American people.

Muñoz is the Tocqueville Associate Professor of Political Science and concurrent associate professor of law at the University of Notre Dame, as well as the founding director of Notre Dame’s Center for Citizenship and Constitutional Government. His scholarship has been cited multiple times in church-state Supreme Court opinions, most recently by Justice Alito in Fulton v. City of Philadelphia (2021) and by both Chief Justice Roberts and Justice Thomas in Espinoza v. Montana (2020).

Religious Liberty and the American Founding is available for purchase through University of Chicago Press.

Advance reviews of Religious Liberty and the American Founding:

"Vincent Phillip Muñoz’s superb new book is an indispensable guide to the issue that will soon replace abortion as the most important point of contention in our constitutional law. [...] The relationship between church and state will become the defining concern of a new era in the courts. [...] The framers wrote the religion clauses of our Constitution to set the parameters, as best they could, for a healthy and noble balance between freedom and order. Recovering the original meanings of those clauses is essential if we are to restore that balance, and Vincent Phillip Muñoz’s book gives invaluable aid in that necessary task." ― Gerard Bradley, author of Challenges to Religious Liberty in the Twenty-First Century

“Muñoz offers a careful reconstruction of the original meaning of the religion clauses, scrupulously mapping the motives and concerns that animated the framers. He vividly recreates their world and draws surprising contemporary implications from the constitutional text they wrote—implications that pose serious challenges to the self-styled originalists of today’s Supreme Court.” — Andrew Koppelman, author of Defending American Religious Neutrality

“Muñoz’s exploration of the natural law foundations of religious liberty is highly illuminating. It is a model of how natural law analysis can be used to understand constitutional rights.” — Philip Hamburger, Columbia Law School

Originally published by Center for Citizenship & Constitutional Government at constudies.nd.edu on August 31, 2022.