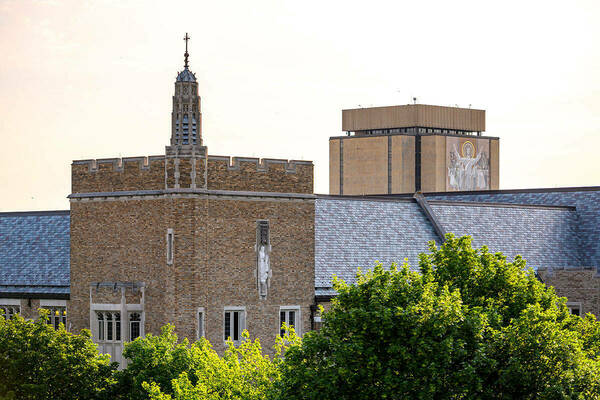 John Meiser ’07, ’10 J.D., previously a career law clerk to Judge Diarmuid F. O’Scannlain of the U.S. Court of Appeals for the Ninth Circuit, serves as the supervising attorney for the Religious Liberty Clinic.

Brendan Wilson ’04 J.D., a partner at Faegre Drinker Biddle & Reath, is an adjunct professor of law and teaches the Religious Organizations Lab Class. The innovative course enables students to work on real-world legal questions that are of specific concern to churches, faith-based nonprofit groups, and other religious organizations.

Meiser, Genova, and Wilson each expressed the profound impact their time at the Law School had on them as students. That impact was influential in their decisions to return to work with members of the Religious Liberty Initiative’s student cohort.

“My own faith is important to me personally, but religious liberty — and the freedom not only to believe but to practice and to live out those beliefs, regardless of one’s faith — is foundational to our republic. I’ve seen that there is a great need for religious liberty work — and often not enough good lawyers and legal organizations to take it all on,” said Meiser.

In its first year of operation, the Religious Liberty Initiative has represented individuals and organizations from an array of faith traditions to defend the right to religious worship, to preserve sacred lands from destruction, to promote the freedom to select religious ministers, and to prevent discrimination against religious schools and families.

“The Religious Liberty Initiative and the Religious Liberty Clinic are critical not only to help fill the need for dedicated and effective advocates now, but perhaps even more importantly, to train a new generation of advocates who will bring this work into their practice in any number of areas,” said Meiser. “My hope is the RLI and the clinic will become a primary — perhaps the primary — training ground for committed and talented law students who wish to pursue this work in their careers. Notre Dame Law School, with its abundance of riches in the field of law and religion and its devotion to teaching and promoting the rule of law, is uniquely situated to serve this role, and it is exciting to be a part of it.”

John Meiser oversees the Religious Liberty Initiative’s clinical litigation efforts and helps train students in the practice of law as they work to defend religious freedom for individuals of all faiths.

“It’s tremendously rewarding to work with Notre Dame Law students and to see their enthusiasm for our cases and the cause of religious freedom,” said Meiser. “I am so proud of the work that we have already been able to put together. I look forward to continuing to help them develop the skills needed to put the knowledge they learn in the classroom into practice.”

Meiser has over a decade of experience practicing law in a variety of contexts. Most recently, he served for six years as a career law clerk to Judge Diarmuid F. O’Scannlain on the U.S. Court of Appeals for the Ninth Circuit. He has also taught as an adjunct professor at Lewis & Clark Law School, practiced law as an associate in the litigation and appellate groups at Sidley Austin LLP in Washington, D.C., and served as an assistant counsel to the Inspector General in the U.S. Department of Commerce.

He said that attending Notre Dame Law School was the most formative experience of his professional life.

“It is difficult to fully describe the influence that the faculty and my education here had on me not only as an attorney but as a person. Notre Dame’s commitment to educating and forming lawyers who will work to promote the public good is unmatched, and it is an honor to return to help fulfill that mission,” he said.

He continued, “I am especially proud to see the school pursue that work in service of religious liberty through the new RLI, and I am grateful for the opportunity to help build and grow the RLI and the clinic.”

Meiser earned both his bachelor’s degree and juris doctor from Notre Dame. While a law student, he served as editor-in-chief of the Notre Dame Law Review and received the Col. William J. Hoynes Award, the Law School’s highest honor.

“My Notre Dame legal education prepared me well to grapple with complex questions in public service and consider the effect of my legal arguments in broader contexts beyond my discrete litigation,” said Genova. “I am excited about the opportunity to help Notre Dame form the Religious Liberty Initiative and use the skills that I gained in practice to help train future lawyers to further Notre Dame’s mission.”

She says she firmly believes in the importance of religious liberty as a precondition for a person’s formation and that governments should provide space for religious communities to flourish both as goods in themselves and because of the fruits that they bear in society at large.

Before returning to Notre Dame, Genova was a trial attorney for the U.S. Department of Justice, Civil Division, where she litigated and argued cases in U.S. district and appellate courts, participated in cases in state courts, and was involved in nationwide coordination of policies and litigation strategy. She previously clerked for Judge Morton I. Greenberg on the U.S. Court of Appeals for the Third Circuit and Judge Andrew S. Hanen on the U.S. District Court for the Southern District of Texas.

She received her J.D. from Notre Dame Law School and her undergraduate degree from Providence College.

Brendan Wilson is an adjunct professor of law with responsibility for the transactional component of the Religious Liberty Clinic. He also teaches the Religious Organizations Lab Class. The class provides students with the chance to work directly with religious nonprofit organizations on their tax, corporate, transactional, employment, and strategic issues. This past semester students worked with a shrine church, a religious school, a healthcare sharing ministry, a healthcare advocacy organization, a Catholic cafe, a community foundation, a Protestant church, and a religious liberty advocacy organization working on Capitol Hill.

Wilson and his wife both attended Notre Dame.

“When we were presented with the opportunity to move back to South Bend, and to work with the Religious Liberty Initiative, we both felt it was the prompting of the Holy Spirit,” said Wilson. “As a family, we know we would benefit from the wonderful community life here at Notre Dame. We also know that the Religious Liberty Initiative would provide an opportunity for me to work with talented students, staff, and faculty on issues that are at the core of our life as people of faith. We are so grateful to be back at Notre Dame and to be part of the Law School community.”

Wilson is a partner at Faegre Drinker Biddle & Reath LLP, where he serves as a member of the firm’s corporate and tax-exempt organizations practice groups. In that role, he counsels churches, charities, private foundations, and associations on tax and corporate law matters.

When he was first admitted to law school he was connected with Bob Greene, a Notre Dame Law School alumnus from the class of 1969, who mentored and supported him during law school and as he began his career. Wilson said Greene changed his life through his incredible generosity and kindness.

“While I hope I can teach students something meaningful about working with religious nonprofit organizations through the Religious Liberty Initiative, I hope even more to provide students with the same kind of support that Bob provided to me as I began my life as a lawyer,” said Wilson.

Wilson earned his J.D. from Notre Dame Law School. He has an LL.M. degree from Georgetown University Law Center and a B.Sc. from the University of Guelph.

Originally published by Denise Wager at law.nd.edu on December 14, 2021.