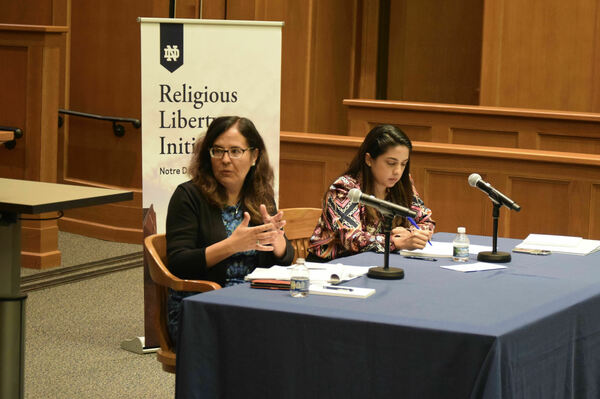 The Notre Dame Law Review, in collaboration with the Law School’s Religious Liberty Initiative, hosted its first symposium of the academic year on October 24 in the McCartan Courtroom. Centered on the theme “Unconstitutional Conditions and Religious Liberty,” the symposium brought together religious liberty experts from across the country for engaging discussions about their written scholarship on unconstitutional conditions.

Berg kicked off the first panel discussion, emphasizing the importance of religious liberty and defining it as the “freedom to practice your faith without government favoritism and without government pressure, as well.” He then shared a few questions to consider when determining whether a condition on benefits is unconstitutional. Berg told the symposium attendees to consider how serious the deprivation is and to ask whether a given benefit can be described as going toward a particular program or activity or if that funding is being used to leverage control over an entire organization.

Clark then continued the discussion and asserted that the “right of religious organizations to obtain legal entity status in the U.S. is problematic.” She currently serves as the associate director for the International Center for Law and Religion Studies at Brigham Young University. Clark has taken part in drafting legal analyses and commentaries of pending legislation and developments concerning religious freedom. She has also written an amicus brief on international religious freedom issues for the U.S. Supreme Court.

The third panelist, DeGirolami, presented an early draft of his new paper, “Mysterizing Religion.” In his paper, DeGirolami explores the idea of mystery and how mysterization in American law is different than in Christianity. “The difference is the source,” he said. “In Christianity, the source is God.” According to DeGirolami, mysterization in the American legal view, in contrast, concerns the human psyche.

He also briefly brought up the question of whether religious schools should accept funds from the government and said that he has “explore[d] arguments that accepting such support corrupts or tarnishes the organizations.”

DeGirolami introduced the term “fractalization” to the attendees, applying it to religious groups. “Fractalization is a tendency toward reduction to smaller units. Religious groups and hierarchies seem to require shattering,” he said. “Religious movement, like political movement, is no longer a kind of eschatology, but a kind of archaeology.”

Following DeGirolami, Helfand wrapped up the first panel discussion, describing religious liberty issues as an “ongoing dance between government and religion.” During his talk, he encouraged attendees to think about what the Smith standard says in regard to religious liberty. Under this standard, a law is constitutional so long as there is a rational or legitimate reason for it; it does not need to further an important or compelling government interest. The standard, also known as the “Smith test,” asks whether a government’s action is “neutral” and “generally applicable.” The government must not target religious beliefs for special disfavored treatment; any rules and regulations that apply to religious beliefs must also apply to other areas of life.

After a short break, Mayer initiated the second panel discussion by focusing on the consequences of unconstitutional conditions and religious liberty in the context of tax law. The topics he covered will be included in his upcoming publication, “Unconstitutional Conditions, Taxes, and Religious Nonprofits.” His research areas include not-for-profit organizations, tax law, and election law, which he teaches at Notre Dame Law School.

The next panelist, Silecchia, spoke about unconstitutional conditions as they relate to health care. She began her discussion by posing the query of whether individuals can face new questions about unconstitutional conditions in the growing case of states allowing assisted suicide. Silecchia then considered what these new changes might mean for institutions and individuals involved in the health care industry.

Uddin, a religious liberty lawyer and author, wrapped up the second panel discussion. Uddin has done extensive analysis on religious freedom issues in the United States as they pertain to the constitutional rights of Muslim Americans. Her areas of expertise include church-state relations, international human rights, law and gender, and family law. Uddin serves on the advisory board of the Religious Liberty Initiative.

Following the event, Courtney Klaus — a third-year student at Notre Dame Law School and managing symposium editor of the Notre Dame Law Review — acknowledged the Law School’s Religious Liberty Initiative. “I think it is great that Notre Dame can continue to be known nationally as a force for religious liberty,” she said. “This symposium is the second one that we have worked with the Religious Liberty Initiative to host. The hope is that this symposium will become an annual tradition for the Law Review and RLI.”

Klaus also expressed her gratitude for the diverse insights shared by the participating religious liberty experts at the event. “The symposium serves as a great example of how religious liberty issues permeate many different areas of law ... There are a lot of diverse perspectives that can be taken even on just one specific topic like ‘unconstitutional conditions.’ Our authors applied our prompt to a vast array of topics, from tax law, to school clubs, to assisted suicide and the health care industry.”

The authors’ written scholarship will appear in a special issue of the Notre Dame Law Review vol. 98’s Reflection issue.

Originally published by Arienne Calingo at law.nd.edu on November 01, 2022.