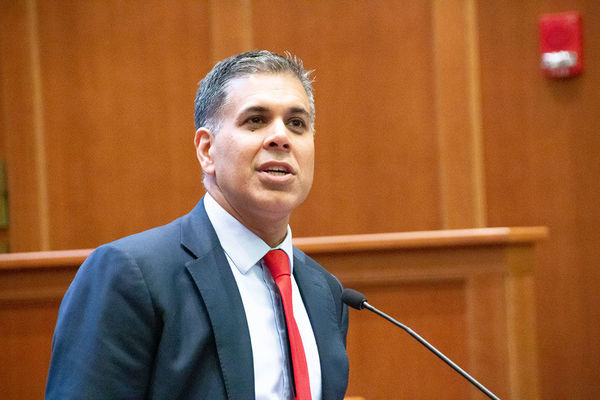 The late U.S. Supreme Court Justice Antonin Scalia was well known for his devotion to the Catholic Church and his support for religious freedom, yet his judicial opinions in religion cases were sometimes surprising.

Judge Amul Thapar of the U.S. Court of Appeals for the Sixth Circuit spoke about Scalia’s views on religious freedom on Thursday, March 28, in the Patrick F. McCartan Courtroom at Notre Dame Law School.

Thapar started by discussing Scalia’s decision in Employment Division v. Smith, a 1990 case in which two Native American men lost their jobs at a drug-rehabilitation clinic after they used peyote as part of a religious ceremony. The two men were also denied unemployment benefits by the state of Oregon because their use of peyote, an illegal drug, was classified as work-related misconduct.

The question of whether the two men in Smith were entitled to a religious exemption eventually rose to the U.S. Supreme Court. In a 5-4 decision, the court affirmed that while states do have the power to allow otherwise illegal activities as part of religious practices, they are not required to make such accommodations.

Scalia wrote the majority opinion in Smith, explaining that there was no religious exemption because the law in question was neutral and generally applicable. As a result, Scalia was criticized by originalists and non-originalists alike for not protecting religious expression and for discriminating against minority religions. As Thapar pointed out, Stanford Law Professor Michael McConnell provided both a historical and linguistic basis for why he believed the Smith decision was wrong. At the same time, other originalists, including Notre Dame Professors Phillip Muñoz, Rick Garnett, Gerard Bradley, and Bill Kelley, have argued that Smith was correctly decided.

To understand Scalia’s decision, Thapar explained, one must understand Scalia’s philosophy as an originalist. He said the judge’s role is to discern accurately and apply honestly the policies adopted by the people’s representatives, except when those statutes conflict with the Constitution. He believed that judges are not supposed to make policy.

Thapar described some other cases to demonstrate that, whether or not one agrees with Scalia, he was consistent.

In Board of Education of Kiryas Joel Village School District v. Grumet in 1994, the Supreme Court ruled in a 6-3 decision that it was unconstitutional to create a public school district to match the boundaries of a religious enclave. In this case, the religious enclave was home to members of the Satmar sect of Hasidic Judaism.

Scalia dissented in Kiryas Joel, writing “the Founding Fathers would be astonished to find that the Establishment Clause — which they designed ‘to insure that no one powerful sect or combination of sects could use political or governmental power to punish dissenters’ has been employed to prohibit characteristically and admirably American accommodation of the religious practices (or more precisely, cultural peculiarities) of a tiny minority sect. … Once this Court has abandoned text and history as guides, nothing prevents it from calling religious toleration the establishment of religion.”

In Locke v. Davey in 2004, the Supreme Court upheld the constitutionality of a Washington state scholarship program that excluded students from pursuing a degree in theology. Scalia again dissented. He reasoned that when a state makes a benefit generally available, it should be available to all.

Thapar added that Scalia didn’t always end up with the result he wanted. Scalia once said, “The judge who always likes the results he reaches is a bad judge.” For example, Scalia was the fifth vote in Texas v. Johnson, a 1989 case in which the Supreme Court decided that burning the U.S. flag was protected speech under the First Amendment. Scalia hated that result.

“So, although Scalia’s decision in Smith has taken significant criticism, including from many originalists, I think a review of his cases shows that he remained consistent throughout his judicial career,” Thapar said.

The event was sponsored by Notre Dame Law School’s chapter of the Federalist Society and the University of Notre Dame’s Constitutional Studies Program.

Originally published by Kevin Allen at law.nd.edu on April 03, 2019.