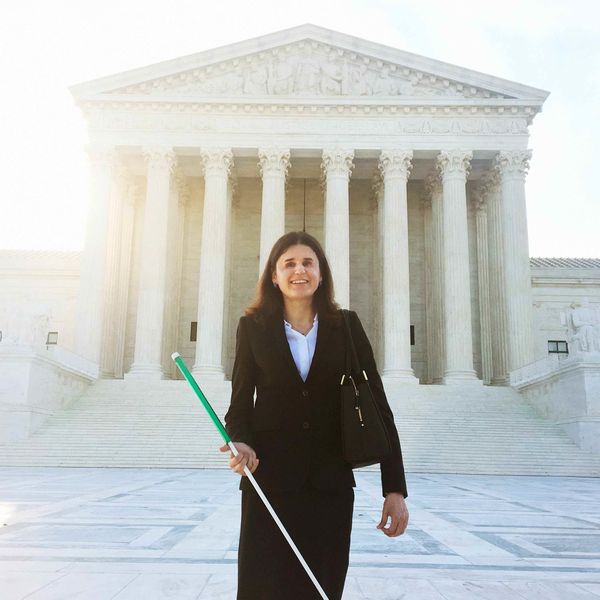 Laura Wolk, a member of Notre Dame Law School’s Class of 2016, will serve as a clerk for U.S. Supreme Court Justice Clarence Thomas during the 2019 term. She will be the third Notre Dame Law graduate to clerk for Justice Thomas. Three faculty members – Nicole Stelle Garnett, Marah Stith McLeod, and Stephen F. Smith – also clerked for him.

Wolk said she is incredibly humbled and excited by the opportunity to clerk for Thomas, who visited the Law School for a week in February 2014 to teach a seminar on religious freedom as the James J. Clynes Visiting Chair in Judicial Ethics.

“He came to speak to my 1L class, and his words about the Constitution, the law, and how to pursue the good life made an immediate impression on me. I cannot imagine a greater honor than the opportunity to serve our country in his chambers for a year,” Wolk said.

Wolk excelled at Notre Dame Law School, where she was a member of the Notre Dame Law Review and served as president of the St. Thomas More Society. She was the recipient of the Peter A.R. Lardy Scholarship Award, which honors the memory of a beloved member of the Class of 1975, and at graduation she earned the Dean Joseph O’Meara award for outstanding academic excellence.

“I have had the great fortune to clerk for two judges who are not only brilliant jurists, but also people of paramount integrity,” she said. “My professional skills and the development of my own legal philosophy have benefited immensely from working with Judge Brown and Judge Hardiman, and I am sure that I will put what I have learned in this regard into practice every day.”

Nell Jessup Newton, the Joseph A. Matson Dean and Professor of Law at Notre Dame Law School, said, “Laura was an outstanding student and a vital member of the Notre Dame Law School community who is greatly respected by faculty, students, and staff alike. I was delighted to learn of her appointment and have no doubt that she will serve the Court with great distinction.”

Wolk praised the Notre Dame Law School faculty and the personal investment they make in all of their students.

“It is such a special place because its faculty witness to the Catholic understanding of the human person each and every day,” she said.

“Through their example both in the classroom and out, they reiterate to their students the idea that our professional successes are of little value if we do not also fulfill our duty to treat all humans with equal dignity and respect,” she said. “And they don’t just speak in abstractions. They invite us into their homes, they worship with us at Mass, they talk about ethics in the classroom. They show us how to put it into practice.”

Snead said he was immediately struck by Wolk’s singular personality, describing her as “brilliant, faith-filled, and personally delightful and humane despite having a clearly iron will.” Snead said he told Wolk in their first conversation that she should attend law school. More importantly, he said, Notre Dame was the only law school in the nation that was perfectly suited to her gifts and vocation.

Wolk, a 2009 graduate of Swarthmore College, had not previously considered going to law school. However, with the seed planted, she applied and enrolled at Notre Dame.

“I can say with complete confidence that I would not be where I am today had I not attended Notre Dame Law School,” said Wolk, who will become the first female blind law clerk to serve at the Supreme Court. “I came to NDLS because I knew that I would receive a top-notch legal education, as well as the formation in the Catholic faith that I could not find at any other law school.”

Wolk has been blind since she was 15 months old – when retinal cancer caused her to lose her eyesight – but she has never allowed her disability to hold her back from pursuing big goals.

She cited the encouragement and support she received from Snead – for whom she worked as a research assistant – as well as Professors A.J. Bellia, Nicole Stelle Garnett, Rick Garnett, Bill Kelley, and Judge Amy Coney Barrett as essential to gaining the professional and personal skills necessary to succeed in a world where, unfortunately, she says there are still so few highly successful people with disabilities.

Wolk said that when she would discuss professional and personal aspirations with her faculty mentors, they never questioned whether it was possible to achieve her goals. Rather, they focused on how she would do it.

She added that the same attitude shone through in both of the judges for whom she has clerked. For example, she took up running with Judge Hardiman and her fellow clerks. “It was just assumed that I would be running with the group,” she said. “All we had to do was figure out how to make that work.” Wolk plans to run a half-marathon in Pittsburgh along with a number of other Hardiman clerks next spring.

“I will never stop being grateful for Notre Dame,” Wolk said. “So often, as a person with a disability, I’ve had the experience of being accommodated largely because the law requires it. But at Notre Dame, the faculty and staff included me because they truly saw me and treated me as an equal. I cannot possibly overstate what a difference this makes.”

Her professors, now colleagues and friends, speak just as enthusiastically about her.

“Laura is the paradigm of the Notre Dame Law graduate, a ‘different kind of lawyer’ par excellence,” Snead said. “Whip smart, deep, passionate, dogged, and animated by her faith and a heart for others. She’s the very best Notre Dame has to offer the world."

The other two Notre Dame Law graduates who clerked for Justice Thomas are Margaret A. Ryan ’95 J.D., now a judge for the U.S. Court of Appeals for the Armed Forces, and Brian P. Morrissey Jr. ’07 J.D., now counselor to the attorney general at the U.S. Department of Justice.

Originally published by Denise Wager at law.nd.edu on August 16, 2018.