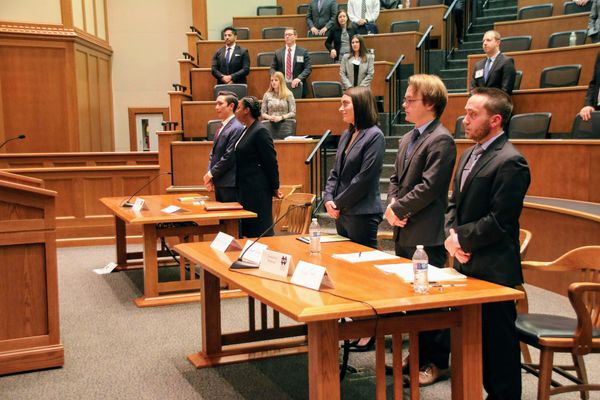 Thirteen moot court teams from nine law schools participated in this year’s competition, which focused on a religious discrimination case. The competition is organized by Notre Dame Law Moot Court Board students and sponsored by the Law School’s Program on Church, State & Society through a generous grant from the Bradley Foundation.

The aim of the tournament is to identify important issues in religious freedom, and have students write briefs and orally argue and defend their client’s positions on those issues, confirming the Law School’s commitment to academics in a community of faith.

“The National Appellate Advocacy Tournament for Religious Freedom helps prepare the next generation of lawyers for work in the courtroom. We are proud to host this tournament here at Notre Dame and hope to do so for years to come,” said Richard W. Garnett, the Paul J. Schierl/Fort Howard Corporation Professor of Law and faculty director of the Program on Church, State & Society.

The tournament is entirely student-run by members of the Moot Court Board. Third-year law student Elizabeth Barnes was the director of the tournament this year. Other members included 3Ls Yara Rashad and Mark Relation. The case problem was written by 3L Henry Leaman, with assistance from 2L Caleb Acker.

“The 2019 Notre Dame National Appellate Advocacy Tournament for Religious Freedom was a huge success. The teams were all incredibly talented advocates, and we were blown away by their creative and well-organized arguments. We are also so grateful for the participation of several prestigious judges from across the country—their contributions certainly elevated the quality of the tournament,” said Barnes. “We like to think of our tournament as a celebration of student scholarship and appellate advocacy training, and we are thrilled that the weekend went so well.”

* Due to a scoring miscalculation of 0.03 points, Team 13 from St. Thomas School of Law did not advance to the semifinal round, but should have. The tournament’s organizers noticed the error after the tournament had ended, and extend their sincere apologies to the team.

Originally published by Denise Wager at law.nd.edu on December 20, 2019.