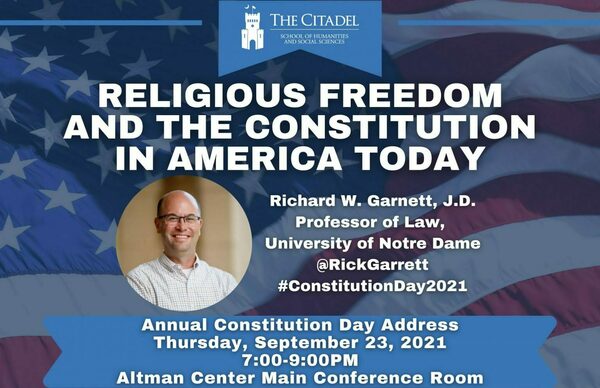 The Citadel will hold Constitution Day events, including one on Sept. 23, with constitutional expert, Prof. Richard Garnett, JD. He is the Paul J. Schierl/Fort Howard Corporation Professor of Law and Concurrent Professor of Political Science at the University of Notre Dame, where he is also the founding director of the Program on Church, State & Society.

“We can all learn from Prof. Garnett’s expertise on First Amendment issues, especially on the freedoms of speech, association and religion. Additionally, he is a leading authority on questions of religion in politics and society,” said Scott Segrest, Ph.D., assistant professor of Political Science at The Citadel. “Professor Garnett earned his J.D. from Yale Law School and clerked for the late Chief Justice of the United States, William H. Rehnquist, and also for the late Chief Judge of the S.S. Court of Appeals for the Eighth Circuit, Richard S. Arnold.”

Information on these events can be found here: https://today.citadel.edu/two-ways-to-advance-your-knowledge-about-about-the-u-s-constitution/