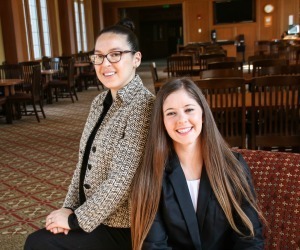 NDLS students Kristi Denny and Daniela Peinado, both 2Ls, participated in the Touro Law Center 4th Annual National Moot Court Competition in Law and Religion. The tournament this year was about the scope of the First Amendment’s "ministerial exception." The ministerial exception is a doctrine in religious liberty law that was affirmed by the United States Supreme Court in the 2012 case of Hosanna-Tabor.

In this case, the Supreme Court only explicitly established that a church has an affirmative defense against employment discrimination claims filed by former ministers. However, various state and federal lower courts have expanded the ministerial exception to apply to other types of employment claims by former ministers against churches.

The problem for the Touro Moot Court tournament involved a church’s motion to dismiss a former minister’s retaliatory discharge claim and breach of contract claim.  It involved two main issues: whether the Supreme Court should apply the ministerial exception to discharge claims framed in tort and contract, and whether such claims can be dismissed on the pleadings without an opportunity for discovery.

The minister claimed the church fired him for refusing to participate in tax evasion with the church's finances, while the church claimed they fired him because they "lost faith in his spiritual leadership," Denny said.

Denny and Peinado wrote an appellate brief and presented oral arguments on behalf of the church. The Program on Church, State & Society sponsored the students.