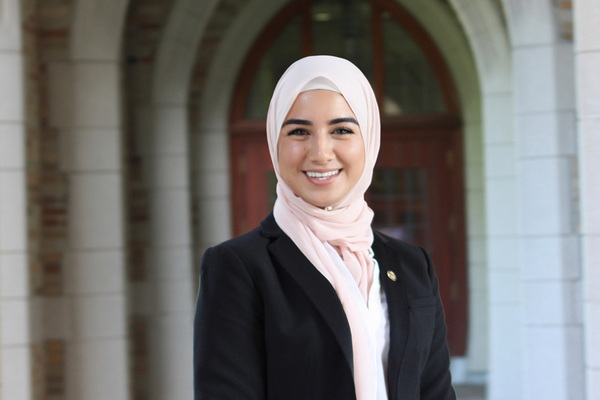 Nasser will participate in a panel titled “Litigating the Reach of Religious Freedom: From Vaccine Mandates to Wedding Cakes to Prison Searches.” The panel will offer different perspectives on how far the reach of religious freedom should go in the United States and address relevant issues that affect Muslims in particular.

Nasser was born in Baghdad, Iraq, and grew up near South Bend, Indiana.

Since 2010, she has actively volunteered in refugee and asylum resettlement efforts, focusing on cases from the Middle East and North Africa. In the fall 2020 semester, she participated in Notre Dame Law School’s externship with the National Immigrant Justice Center, where she helped win an asylum case for a young woman from Central America.

Through the Law School’s Religious Liberty Initiative, she has been involved in efforts to address the Uyghur Muslim genocide in China. “We’re exploring international and domestic options that both bring attention to the situation and provide redress to survivors,” Nasser said.

The Religious Freedom Institute, based in Washington, D.C., recommended Nasser to the conference’s organizers.

“It is a joy and a privilege to work with amazing students like Zahraa on efforts to support religious liberty at home and abroad,” said John P. Murphy Foundation Professor of Law Nicole Stelle Garnett, who is supervising this year’s cohort of Religious Liberty Initiative students.

“As an immigrant and a Muslim, Zahraa brings an important, diverse perspective to our work advancing the cause of religious freedom,” Garnett said. “Her participation in the Religious Liberty Initiative has been indispensable this year.”

Nasser earned a bachelor’s degree in finance and economics from Loyola University Chicago in 2015. She then worked with a large consulting firm in Chicago before coming to Notre Dame. After graduating from law school, she will clerk for Judge Jack Zouhary of the U.S. District Court for the Northern District of Ohio.

Learn more about the National Association of Muslim Lawyers 2021 Conference.

Originally published by Kevin Allen at law.nd.edu on November 18, 2021.