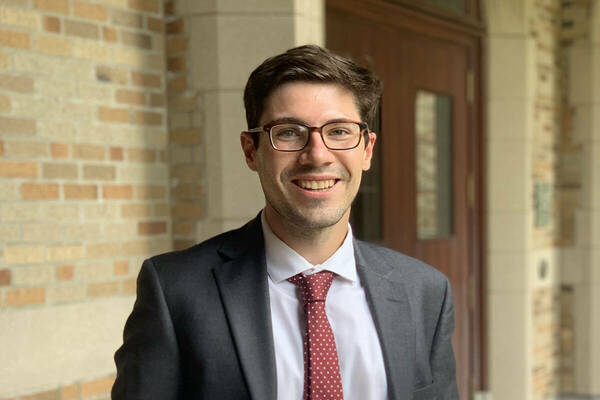 As a member of the Religious Liberty Initiative’s 2021-2022 cohort, third-year law student Tom Hellenbrand has had several opportunities to work with Notre Dame Law School faculty on research and writing projects.

For example, he assisted with an amicus brief in the case Gordon College v. DeWeese-Boyd, which was filed in September. In November, the Houston Chronicle published an op-ed on Ramirez v. Collier that Hellenbrand wrote with Religious Liberty Clinic Supervising Attorney John Meiser. The op-ed argued that the U.S. Supreme Court should allow John Henry Ramirez, a convicted murderer on death row in Texas, to have his pastor pray over him and touch him during execution.

Read more about Hellenbrand’s work and experiences in the Q&A below.

What was your experience like working on the Ramirez v. Collier op-ed that was published in the Houston Chronicle?

It was quite an iterative process, which I greatly enjoyed. John Meiser and I circulated several drafts and constructively critiqued each other’s work throughout. It is always a pleasure working with John; he never fails to bring clarity, subtlety, and precision to an issue. I am proud to have been a part of this effort and hopefully have focused more attention on this important case.

What about that case was most important to you?

For Ramirez — indeed, for many Americans — earthly death is thought to be a step toward eternal life. Religious ministers do not serve only to comfort the dying but to help prepare them for spiritual reconciliation in the hope of redemption. Our society would be committing a great injustice if it ignored this reality and denied Ramirez’s simple request.

Can you describe your experience in authoring, and publishing, a written piece for national media?

After over two years in law school, I have painstakingly practiced the arcane language of legalese. Consequently, it was a challenge writing for a national audience, but John helped me to concentrate on the essential issues and present them in digestible prose. Ultimately, we wanted to emphasize Texas’s entirely specious reasoning for denying Ramirez his right to religious liberty in the execution chamber.

What drove you to join the Religious Liberty Initiative cohort? If you could identify one motivating factor, what would that be and why?

I jumped at the opportunity to be part of such a star-studded team of professors, lawyers, and students who are all deeply passionate about protecting people’s right of religious liberty in this country and around the world.

There are several cases that concern religious liberty on the U.S. Supreme Court docket and others that are working through the U.S. Court of Appeals system. Which cases do you find especially interesting?

I will be following Carson v. Makin, which concerns Maine’s exclusion of religious schools from the state’s school choice program. The Supreme Court will have the opportunity to reject the status/use distinction that has been employed to discriminate against religious schools.

And I will also keep an eye on Gordon College v. DeWeese-Boyd, which is currently at the cert stage. It is an interesting case from Massachusetts asking the Supreme Court to apply its ministerial exception doctrine to professors at universities and colleges. If Gordon College does go to the Supreme Court, the court could uphold the First Amendment right of universities and colleges to direct and define their religious educational missions free from state interference. Both cases would have major ramifications for the right of religious liberty in education.