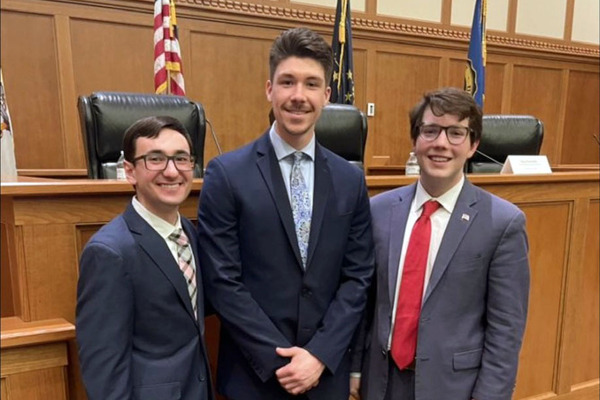 Edwards used extensive research skills and his law school training to craft the best arguments and write the brief that laid the framework from which D’Entremont and Gangemi argued.

D’Entremont and Gangemi worked with other members of Notre Dame Law School’s Moot Court Board to prepare for the tournament. They refined their arguments and honed in on the most important issues in the case. They spent weeks practicing their opening statements, responding to questions, and internalizing the best arguments.

“I hope to one day practice appellate litigation,” D’Entremont said. “Notre Dame, through the Moot Court Board, provides specific and helpful training to help prepare me for such a career. The tournament outcome proves that the work of the Notre Dame faculty directly helps our students.”

After graduation, D’Entremont will clerk for Chief Judge Tom Schroeder ’84 J.D. of the Middle District of North Carolina, and then for Judge Cory T. Wilson of the U.S. Court of Appeals for the Fifth Circuit. Following his clerkships, D’Entremont will work for Jones Day in Houston.

D’Entremont, Edwards, and Gangemi are all part of the Law School’s Moot Court Board. As members of the board, students organize and compete in a variety of intramural and intercollegiate competitions in appellate and international divisions throughout the year.

In addition, D’Entremont is a member of the Religious Liberty Initiative’s student cohort for the 2021-22 academic year.

Originally published by Denise Wager at law.nd.edu on April 08, 2022.