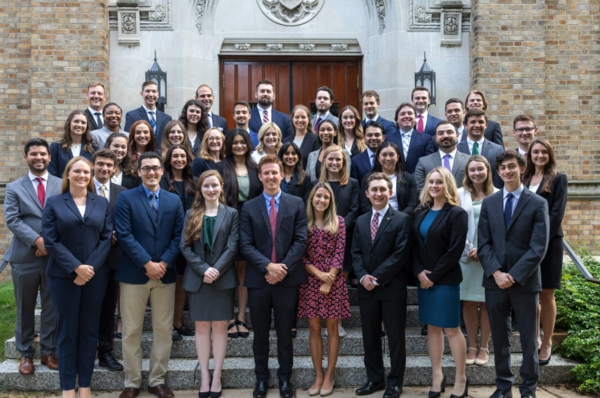 The Religious Freedom Tournament takes place every fall and features moot court teams from law schools across the country. The objective of the tournament is to identify and carefully analyze important issues in religious freedom by posing challenging questions as they pertain to the First Amendment. The student participants write briefs and orally argue and defend their client’s positions on those issues before a mock Supreme Court of the United States.

Ethan Carlson and Tommy Walsh from Liberty University School of Law won best brief, and their brief averaged 88 out of 100 possible points through multiple rounds of grading. Along with their team placing second overall at the tournament, Long and Licata from the George Washington University Law School won second place brief; their brief averaged 83.5 through multiple rounds of grading. Phillip Allevato and Mikaela Foster from Pepperdine Caruso School of Law were recognized as the co-best preliminary round oralists. Both oralists averaged between 87 to 88 out of 100 possible points during the preliminary rounds.

Leo O’Malley, a third-year student at Notre Dame Law School, was the director of the tournament this year. “For me, there were so many really amazing moments during the weekend that it is hard to pick just one,” O’Malley said. “I would say that both the semifinal and final rounds were definite highlights. The panels of judges and litigators were absolutely outstanding questioners. The tournament prompt was extraordinarily difficult as it probed numerous unsettled areas of Free Exercise and Establishment Clause jurisprudence. It was incredibly rewarding to see the panels and oralists wade through these issues with care and nuance. The competitors really rose to the challenge.”

For more information on the tournament, you can visit Notre Dame Law School’s Moot Court webpage.

Originally published by Arienne Calingo at law.nd.edu on November 08, 2022.