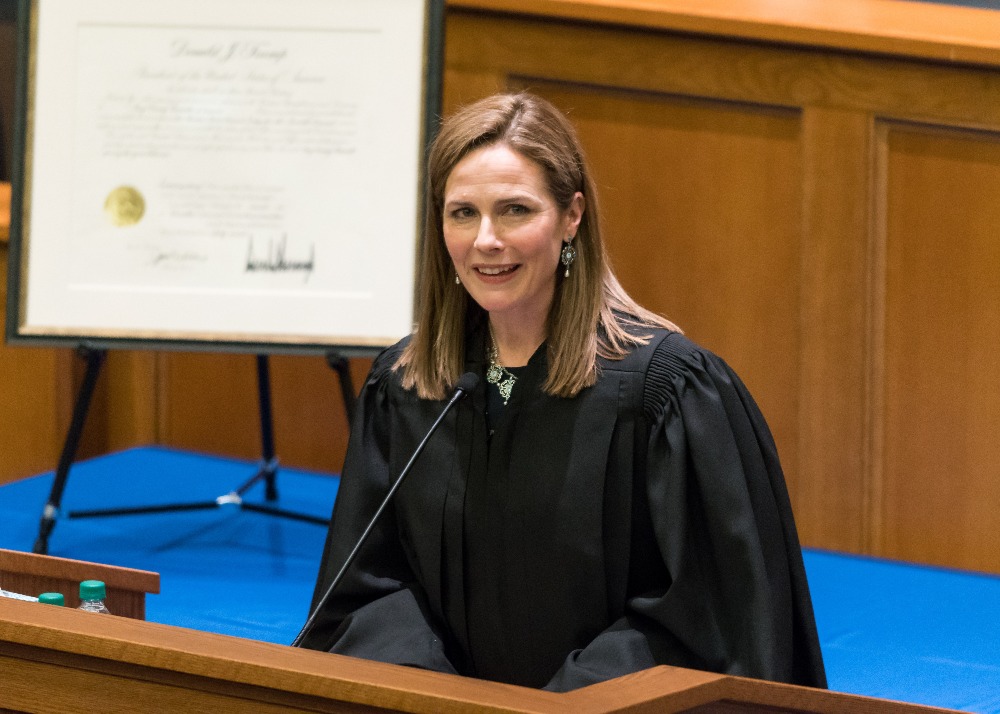 Notre Dame Law School was privileged on Friday to celebrate a beloved alumna and professor, Amy Coney Barrett, ’97 J.D., by hosting her investiture as a judge for the U.S. Court of Appeals for the Seventh Circuit.

An audience of colleagues, friends, and family members filled the Patrick F. McCartan Courtroom for the ceremony, which included a touching combination of praise and anecdotes from people who have known Judge Barrett personally and professionally throughout her life.

“I have learned many things over the last year, but truly, the most important is how fortunate I am to have a life brimming with so many wonderful people,” Barrett said.

Barrett will continue to teach at Notre Dame Law School as one of two judges on the Law School’s faculty. Judge Kenneth Ripple, also of the U.S. Court of Appeals for the Seventh Circuit, has taught at the Law School for more than 40 years. 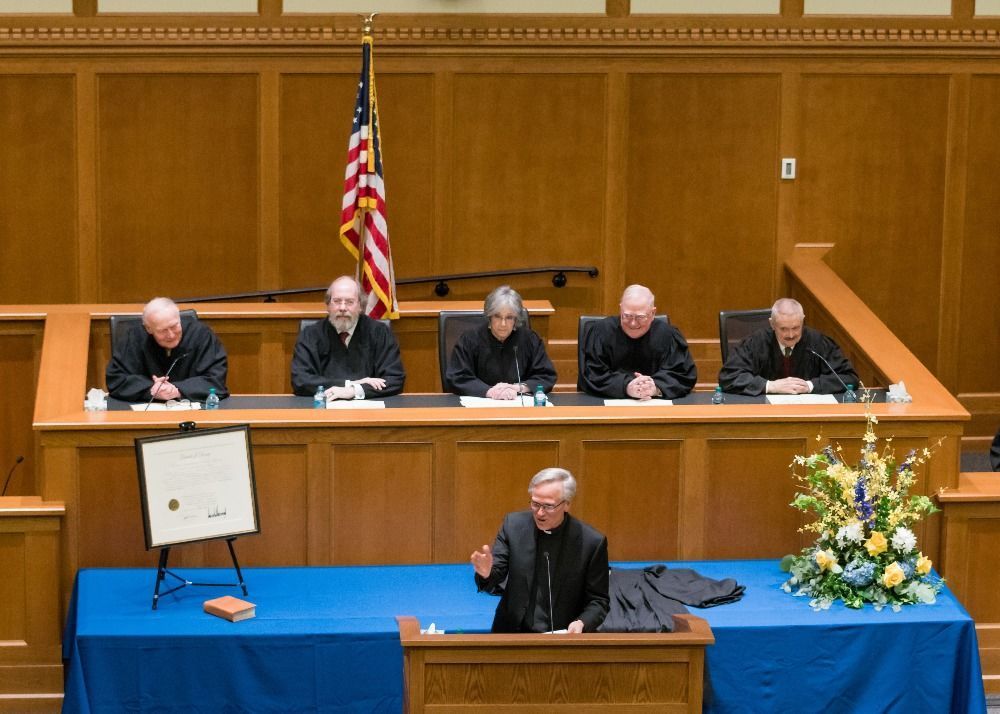 Rev. John Jenkins, C.S.C., president of the University of Notre Dame, delivered the invocation at the investiture. Several other judges from the U.S. Court of Appeals for the Seventh Circuit, seated behind Jenkins in the above photo, attended the investiture. Chief Judge Diane Wood, seated in the center, presided over the ceremony. 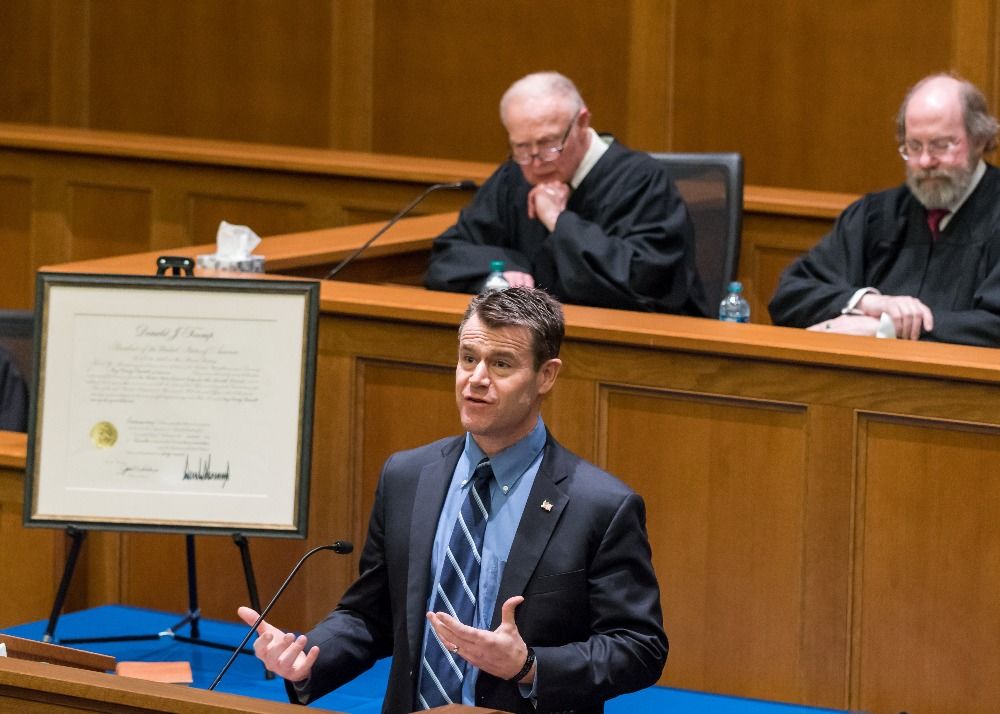 U.S. Senator Todd Young of Indiana praised Barrett for her brilliant legal scholarship and integrity. Young, pictured above, noted that Barrett is the first woman from Indiana to serve as a judge on the U.S. Court of Appeals for the Seventh Circuit. 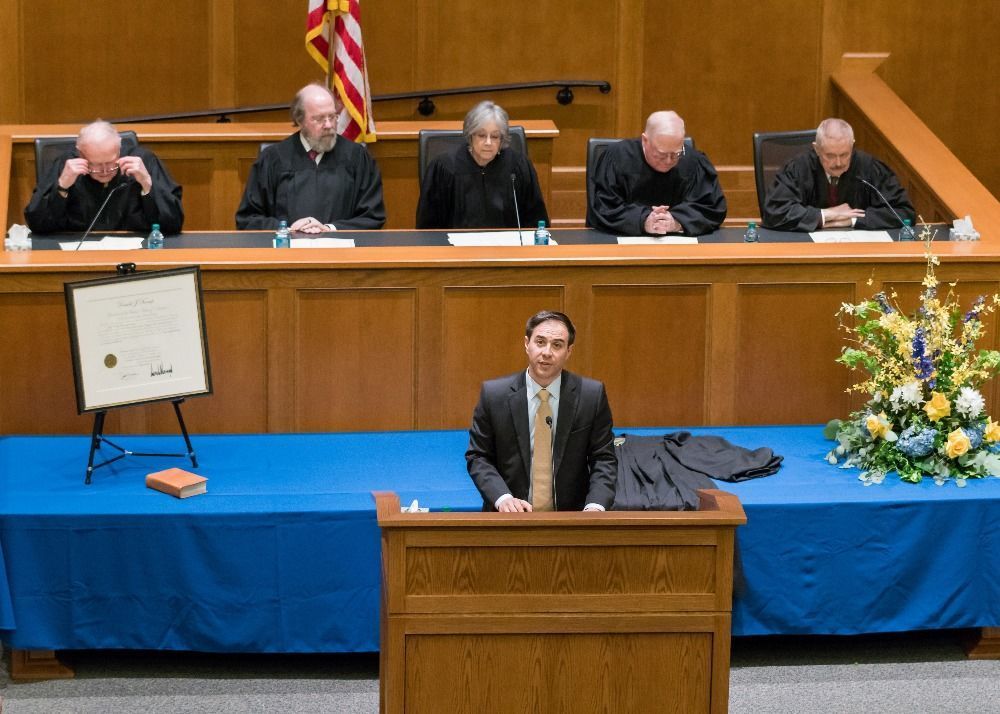 “This was high praise coming from Justice Scalia, who used to say all of us law clerks were fungible,” Lovitt said, drawing laughs from the audience. “I’m confident that Justice Scalia is looking down on her today and beaming with pride.” 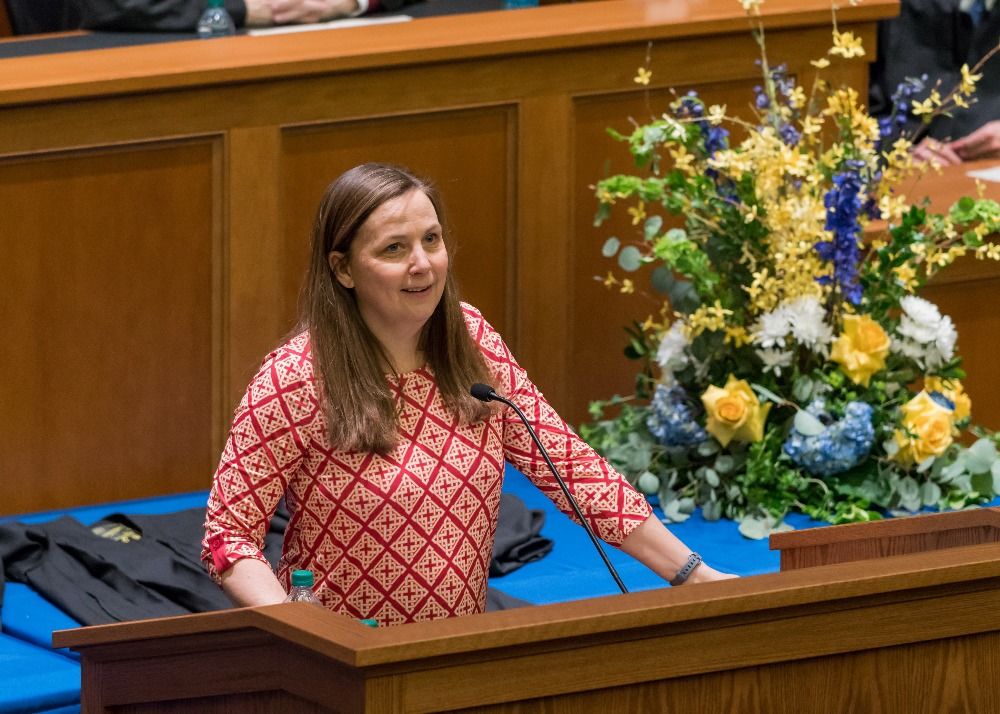 Notre Dame Law Professors Nicole Stelle Garnett, pictured above, and Bill Kelley both offered remarks about Barrett at the investiture. Garnett talked about how gracefully Barrett faced the Senate confirmation process when she was nominated to serve as a judge. 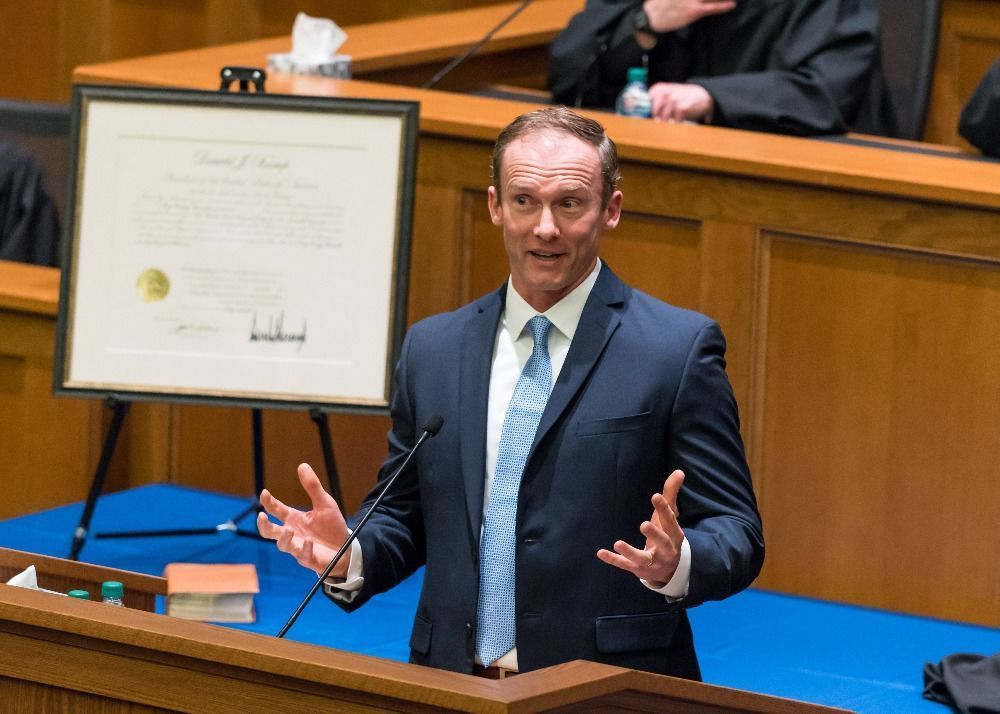 Barrett’s husband Jesse Barrett, ‘96, ’99 J.D., an assistant U.S. attorney in the Northern District of Indiana, earned a standing ovation after he delivered a touching speech about his wife’s gift for empathy and personal relationships.

The couple met at Notre Dame Law School, and he talked about the many changes they have experienced together as they have lived in different cities, houses, and apartments, and brought seven children into their lives. “But there is one thing that hasn’t changed – it is humbling to be married to Amy Barrett,” he said. “You can’t outwork Amy. I’ve also learned you can’t outfriend Amy.” 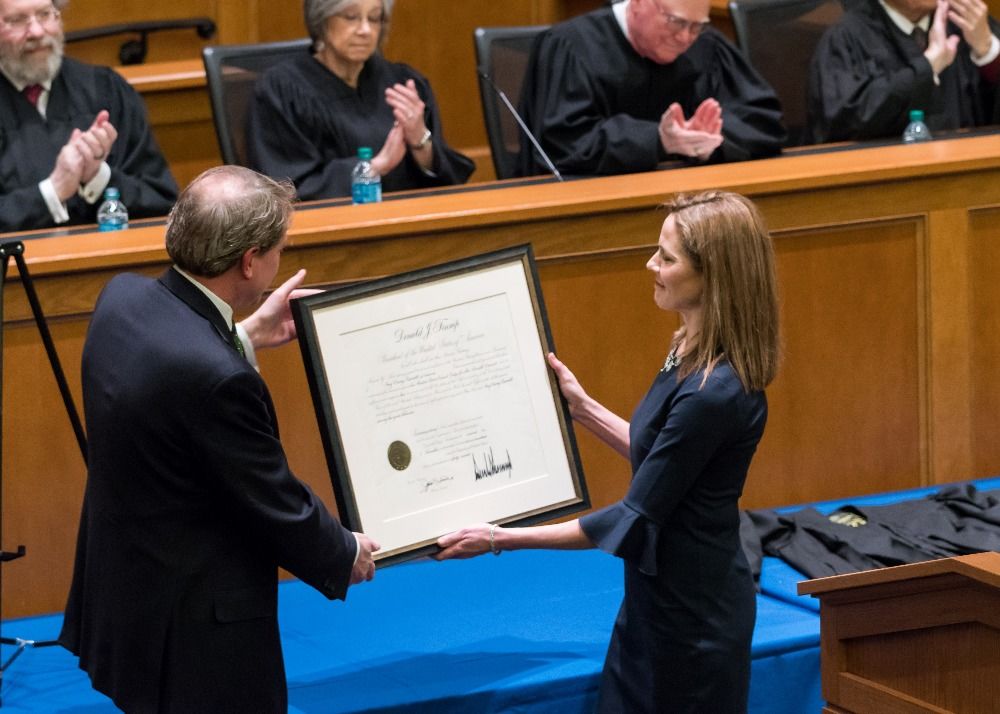 White House Counsel and Assistant to the President Donald McGahn, a 1991 graduate of the University of Notre Dame, presented Barrett with the Presidential Commission. McGahn is pictured on the left in the above photo. 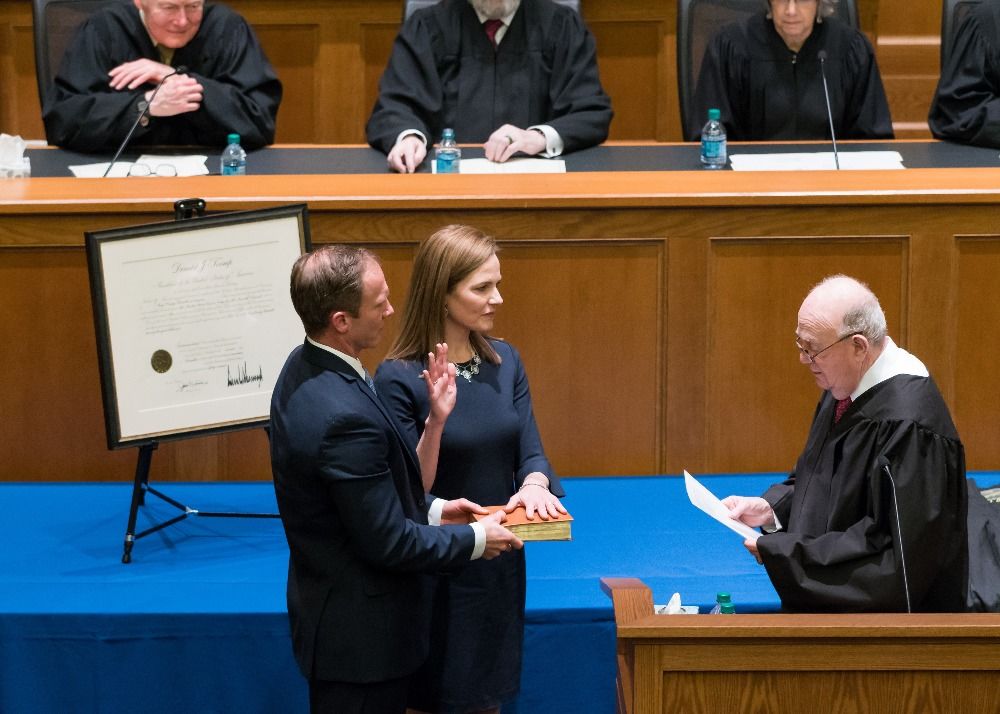 The Honorable Laurence H. Silberman, senior judge for the U.S. Court of Appeals for the D.C. Circuit, administered the oath of office. Silberman is pictured on the right in the above photo. Barrett clerked for Judge Silberman after graduating from Notre Dame Law School. 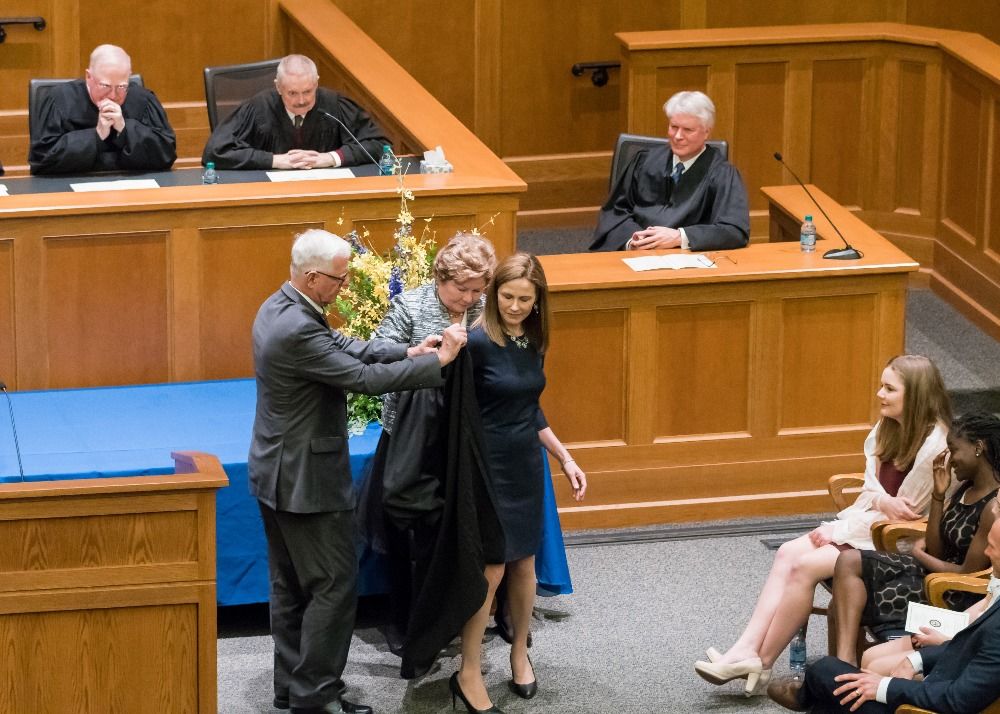 Barrett’s parents – Michael and Linda Coney – presented her with her judicial robe. 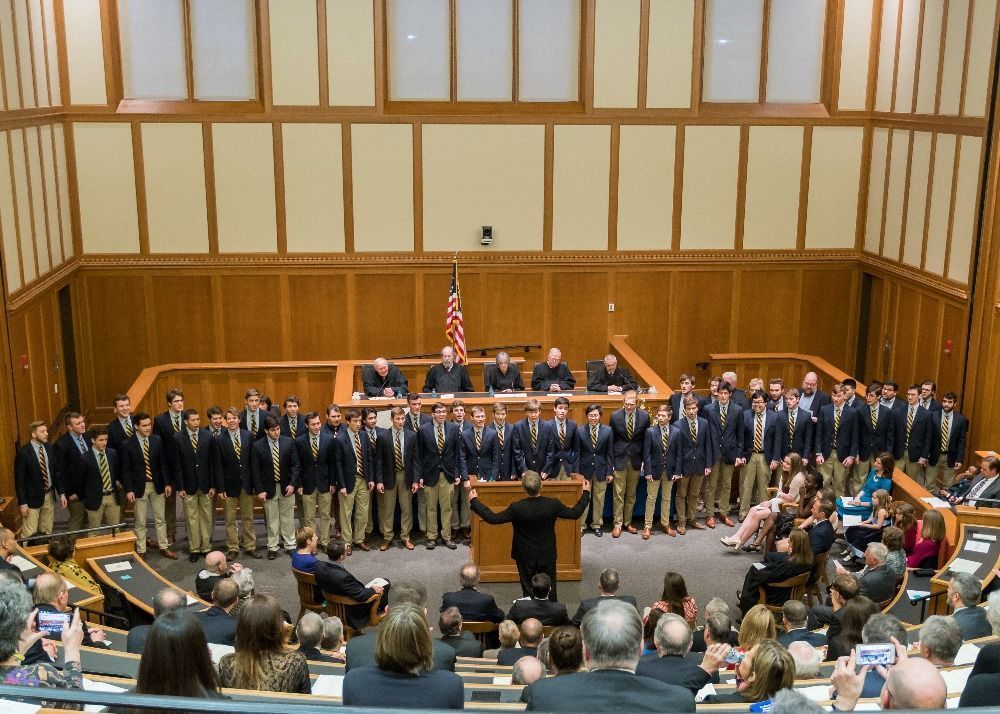 The investiture closed with the Notre Dame Glee Club singing “This Is My Country.” The song was special to Barrett’s grandfather, a World War II veteran, and the family regularly sings it at gatherings.