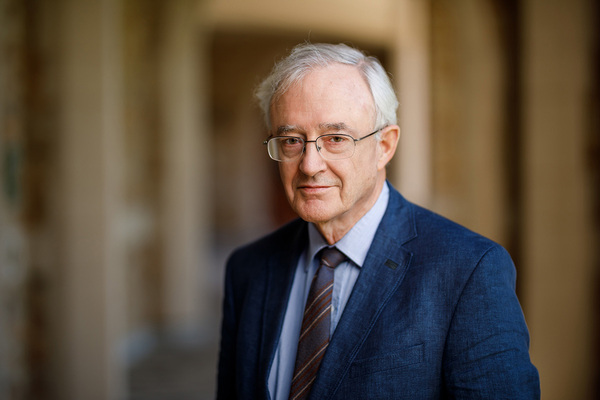 When King Charles III issued the first New Year Honours of his reign last week, a longtime Notre Dame Law School faculty member was among those on the list.

Biolchini Family Professor Emeritus of Law John Finnis was made a Commander of the Order of the British Empire for his services to legal scholarship.

Finnis — renowned throughout the world for his work in moral, political, and legal theory, and constitutional law — taught and researched at Notre Dame from 1995 to 2020. He previously taught at the University of Oxford in England, where he now resides in his retirement and continues to be a professor emeritus of law and legal philosophy at Oxford.

“I am thrilled that Professor John Finnis received this recognition. He is one of the greatest legal minds of all time, and it’s always a delight to celebrate the impact of his work,” said G. Marcus Cole, the Joseph A. Matson Dean and Professor of Law at Notre Dame Law School. “Our students and faculty — myself included — have been blessed to count John Finnis as a friend, colleague, and mentor. We are cheering the news of his latest honor, which is richly deserved.”

Finnis’s towering career as a teacher and scholar has produced classic, influential works such as Natural Law & Natural Rights, published in 1980 by Oxford University Press.

In fall 2021, Pojanowski organized a conference to celebrate Finnis’s work. The conference, “The Legacy of John Finnis: Contemporary Engagements and Developments,” was held at Notre Dame’s London Global Gateway.

“My 25 years in the Biolchini Family Chair were an incomparable opportunity that I profoundly appreciated from beginning to end, for the teaching, the research facilities, and the scholarly and collegial interaction with students and colleagues at Notre Dame Law School,” Finnis said this week. “It was an opportunity also, as it turned out, to inaugurate an interaction between the Law Faculties of Oxford and Notre Dame that is continuing and I hope will bring much good fruit for both universities for many years.”

Finnis earned his LL.B. in 1961 from Adelaide University in his home country Australia, and his doctorate in 1965 from Oxford University as a Rhodes Scholar at University College Oxford.

His other honors have included being elected in 1989 a Fellow of the British Academy, in both the law and philosophy sections, and in 2019 a Companion of the Order of Australia. The citation for the latter, Australia’s highest civil award, was: “For eminent service to the law, and to education, to legal theory and philosophical enquiry, and as a leading jurist, academic and author.”

When Queen Elizabeth II appointed him honorary Queen’s Counsel in 2017, the Lord Chancellor’s office announced: “He is a leading legal philosopher and legal scholar at Oxford University and Notre Dame. Many of his former students have gone on to teach at prestigious universities around the world, or to sit in the higher courts in England and Wales and beyond. Over his long and distinguished academic career in the law faculties at Oxford and at Notre Dame, Professor Finnis has made a prolific and peerless contribution to legal scholarship. He is known for his work in the tradition of classical natural law thought, which has transformed the study of jurisprudence across the world. He is also a distinguished authority in other areas of law, particularly constitutional law and medical law, and his work in these areas has been cited by the UK Supreme Court and the Court of Appeal. Professor Finnis has dedicated himself for many years to the service of legal scholarship and legal education and at the very highest level.”

Originally published by Kevin Allen at law.nd.edu on January 06, 2023.