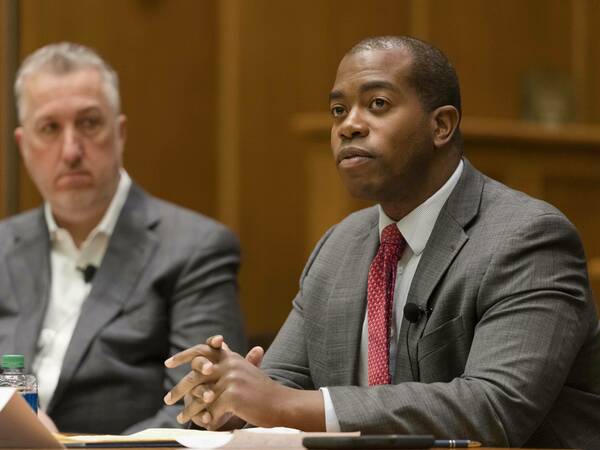 On October 26, Notre Dame Law School’s Religious Liberty Initiative and the de Nicola Center for Ethics and Culture hosted the “Religious Liberty Issues in Healthcare” panel discussion in the McCartan Courtroom. The discussion featured a panel of distinguished speakers from across various fields, including nonprofit and religious organizations, higher education, and health care. The panelists provided their unique insights and personal experiences on several issues, ranging from the legal challenges facing religious health care systems, current issues in medical licensing and regulation, cultural challenges facing medical students and doctors, and the protection of religious rights of minority religions, particularly of Orthodox Jews.

Lefkowitz kicked off the panel discussion by addressing how his Orthodox Jewish faith heavily influences his work at Chayim Aruchim, also known as the Center for Culturally Sensitive Health Advocacy and Counseling. “For me, my actions are guided by the Torah, the Jewish Bible,” he said. “The Bible teaches us that the sanctity of human life outweighs all our earthly possessions. This applies even to a severely neurologically impaired person or a person who is destined to die due to a fatal illness or accident. The leading principle is that life is of supreme value ― every life.”

Chayim Aruchim, which translates to “long life,” seeks to help members of the Jewish community make end-of-life health care decisions according to their religious beliefs. Through his work, Lefkowitz has provided families with halachic guidance for various health matters, such as brain death and palliative care, two issues he addressed during his talk. He spoke in great depth about the importance of values in health care: “One should seek a doctor that shares the patient’s values. The United States of America has the most outstanding medical institutions in the world. However, when it is determined that a patient cannot be cured, this is where the religious values and the new progressive liberal values collide.”

Lefkowitz also recognized the diversity of perspectives and faith traditions that shape approaches to health care and, therefore, the patient experience. He noted that medical schools should play a role in inculcating intercultural competence among health care professionals. “It seems to me that the most important educational lessons a medical professional can learn are that there are numerous values out there and that the most important thing is to respect and treat the patient according to the patient’s values. I understand that in medical school, they teach ethics. I don’t understand whose ethics they are teaching,” he said, drawing some laughs from the attendees. “If they really want [students] to learn about ethics, they should bring in people from various different backgrounds to teach them what their values are. That way, they will be sensitized that medical care needs to be given in a culturally sensitive manner,” Lefkowitz continued. “Each faith should have their own Chayim Aruchim.”

Banko echoed some of Lefkowitz’s points, reiterating that life is of supreme value and that faith has the power to play an integral role in how health care institutions approach their overarching services. “Judeo-Christian love is an animating principle of health care, and it guides our principles of suffering and death,” he said. “Every person deserves a good birth and a good death. All life is sacred. All people are children of God.”

Banko serves as the President and CEO of Centura Health, a Christian-based organization in which CommonSpirit Health, the largest national Catholic health care system in the United States, is one of its two Sponsors. “We asked our associates why they work there. One, mission; two, working with incredible people; three, impacting their neighbors; and four, mind-body-spirit care, or ‘whole person’ care, which I think is different from other organizations. Spiritual care providers are part of the care team. ‘Whole person’ care [means] being able to attend to a person’s whole needs, not just what they’re there for physically. It’s more person-centered care than just delivering regular care,” he said.

In line with its mission to deliver inclusive and equitable care, Centura Health has started doing significant work around unconscious bias training for physician and staff leadership. Like Lefkowitz, Banko also acknowledged the importance of ethics committees in health care institutions as a way to ensure that health care professionals and systems are providing culturally competent patient care. “We need more faith in our work ― faith in business, faith in law, faith in engineering. We need to speak in an inclusive way,” Banko said.

Toward the end of his talk, Banko gave the Religious Liberty Clinic a shoutout for filing an amicus brief at the Colorado Court of Appeals on behalf of the Catholic Medical Association and Coptic Medical Association of North America. The amicus brief sought to protect the fundamental right of health care workers and religiously affiliated health systems to carry out their ministries in accordance with their religious beliefs.

In reference to the filing that Banko addressed, Brown said, “I’m concerned that more and more states will seek to investigate, harass, and shut down religious health care providers and professionals within our country. It’s not only an issue of violating basic civil rights that are vital to human dignity, but it’s also an issue to health care access in the United States.”

Throughout his talk, Brown highlighted the importance of religious freedom in relation to health care and brought up the potential concerns and negative impacts that may arise for the health and well-being of patients if health institutions in the United States choose to diminish religious freedom. “It’s my contention that the collective actions to undermine medical conscience and religious freedom at the federal level and some states would, if successful, make Catholic health care in the United States unlawful and would deprive, over time, millions of patients who are some of the most vulnerable and most in need of quality care,” Brown asserted.

Brown consistently defined religious freedom as the “freedom to love,” leading him to encourage the attendees to consider contrasting motivations for helping people; these motivations have a strong correlation with approaches to health care. “If we strip religious freedom and medical conscience out of health care, we’re stripping caritas (charity) out of the healthcare system and replacing it with a financial motive, [but] the patient isn’t simply a financial opportunity. The patient is someone that I have an obligation to love, to care for — for their life and their dignity,” he said.

Brown leads Christ Medicus Foundation (CMF), a Christ-centered Catholic health ministry where Catholic teachings are central to its mission and core values. Through its CURO Catholic health care community, the ministry provides Catholic health coaching, online wellness courses, as well as spiritual direction through its Spiritual Health Program, which was launched earlier this year; these services are, in part, influenced by the work of Dr. Bob Schuchts and the John Paul II Healing Center. “We see healthcare as an expression of the love of God for the sick and the suffering,” Brown said.

Following Brown’s talk, Dugdale wrapped up the panel discussion. She works as a practicing physician, primary care doctor, clinical ethicist, and the director of the Columbia Center for Clinical Medical Ethics. As the only panelist not representing a religious organization, Dugdale was able to offer her perspectives on health care issues from a different vantage point.

“I’ve worked in several large academic health care centers that are all secular and not faith-based,” she said. “What drives us is not human dignity, it’s not life, it’s not love. It is on being in the forefront of medicine. The world I’m in is a world of power and technology and money making and not a world that is characterized by love of patient.”

Dugdale provided a bigger picture of how academic health care centers approach their work in patient care. She drew a sharp contrast to the approaches that her fellow panelists had spoken about — care founded upon faith-based values. Academic health care centers, according to Dugdale, demonstrate compassionate care of patients by centering their work on “having the best technology, the cutting-through approaches and techniques.” Perfecting state-of-the-art medical treatments and cures is understood to equate with the best patient care.

Dugdale shared two cases in which, from her viewpoint, religious liberty was threatened at prestigious secular institutions. In one example, an evangelical medical student was assigned to care for a dying patient whose religious beliefs aligned with the student’s beliefs; thus, the student, patient, and patient’s family prayed, sang, and read the scriptures together. When the dean of students found out about this, he dismissed the student’s actions and told her that participation in worship and religious practice is not the role of a medical professional. He directed the student to cease with the activity; otherwise, she would be put on leave. In a second example, a pro-life student club at a secular institution faced significant backlash and was ultimately shut down.

Referring to the diversity of the panel, Dugdale said, “From the standpoint of a practitioner at a non-religious institution, everything that we said represents the diversity of the American experience. There is no one approach to health care. There’s no one approach to medical education. And certainly, what is permissible and acceptable in some locales won’t be at all in others.”

Reflecting on the panel discussion, Hadiah Mabry — a first-year student at Notre Dame Law School and one of the Program on Church, State & Society’s inaugural Murphy Fellows — shared her thoughts on the dynamic relationship between religious liberty and human dignity: “Religious liberty creates a space for dialogue because it is built on respect and a willingness to see the innate dignity in another person by allowing them to choose for themselves, even about issues of existential importance. Without an ability to see goodness in another person, it becomes very difficult to work for justice or peace.”

Originally published by Arienne Calingo at law.nd.edu on November 08, 2022.